The Most Popular Types of Roof Racks

Dementia is a disease like no other. Surveys suggest it’s more feared than cancer, stroke or heart failure. And it’s quite understandable why the prospect of developing dementia is far more daunting then having any other serious medical condition. Dementia affects people’s cognitive and motor skills. As it progresses, the individual is tragically “robbed of his identity” as his initial self slowly fades away. Speech, memories, emotions – everything becomes gradually wiped out. And worst of all, there is no known cure.

But recent research suggests that this fear of dementia and Alzheimer’s is mistaken. Scientists, medical professionals, and sufferers and their families all try to raise the awareness of this condition and shed the belief that it’s all gloom. In fact, people with Alzheimer’s and other forms of dementia can retain their sense of self and maintain an active and positive lifestyle well until the final stages set in. The answer lies in having a positive mindset and a good network of friends and loved ones that are supportive and willing to help in every step of the way. 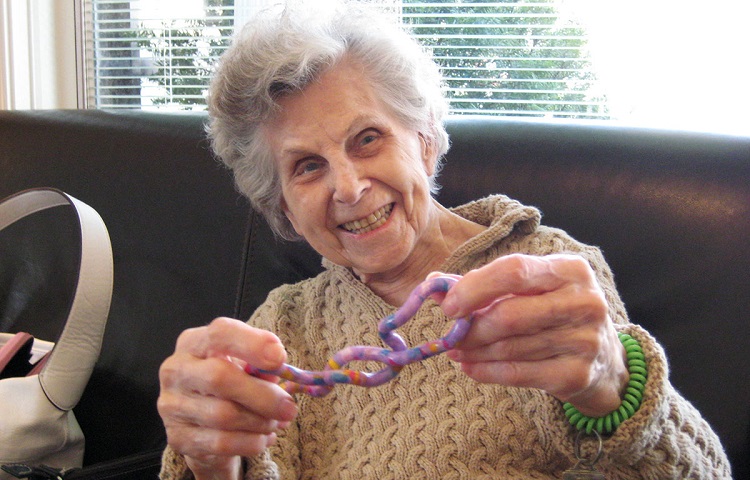 There are many things caregivers, families and friends can do to help dementia sufferers deal with memory loss, slower cognitive functions, lack of focus, problems with movement, and other symptoms. Of course, there’s no denying that the final stages of the disease are incredibly difficult, with the resources we have today, the journey can be made easier for both the patients and the people around them. Thanks to the raised awareness around this disease, we now have a vast range of products for people with dementia that are designed to maintain a safe living environment, help with memory and orientation, as well as allow the person to perform basic functions autonomously like going to the bathroom, washing, dressing and eating.

If the person lives at home, it’s important to make adaptations that will allow them to move around safely, like for instance install grab rails around the length of the walls, ramps if the person is bound to a wheelchair, and glowing tape that can help them orientate in the dark. Something as simple as special utensils can allow the individual to preserve some of their independence and be a positive boost to their morale. There are also products for people with dementia that help deal with memory impairment, like for instance automatic calendars stating the exact date and day of the week, noticeboards with reminders and even automatic pill dispensers that are programmed to track dosing and sound off when it’s time to take medication.

Often, dealing with dementia can be frustrating for both the patient and their caregivers. Some of the most helpful things you can do if you know someone suffering from this condition is to try understand what the person is experiencing, respect their individuality by accepting them and listening to them, speak calmly and softly to them, and find the best strategies and products to address their needs.

The Most Popular Clothing Items for Cricket Players

Whether you are into skateboarding, skiing, cycling, or you like the competitive nature of... more»

Leather Bags: The Most Popular Accessories with Timeless Design

What is it about leather bags that makes them so popular? Is it the high-quality of the material or... more»

As Aussies try to make the most out of the warmer weather, for some people, the summer kayaking,... more»

The Most Popular Brands and Types of Knitting Yarn

Yarn stores are beautiful, aren’t they? Once you’re inside, you feel like you want to... more»

Pallet Racks: The Most Popular Storage Solution for Your Warehouse

Choosing a proper storage solution for a warehouse is crucial for the inventory management of your... more»